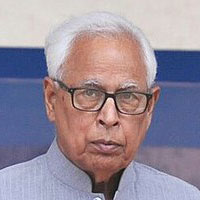 From February 2003 until he became the governor of the state, Vohra had been the Government of India’s interlocutor in Jammu and Kashmir. He was awarded India’s second highest civilian honour, the Padma Vibhushan, for his contributors to the field civil service, in 2007.